By David Fleet
Editor
Some Genesee County children will be a little happier and drier thanks to the efforts of Reid and Oaktree elementary students. 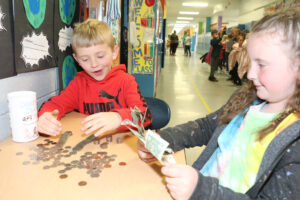 Reid and Oaktree elementary joined 38 other area schools and participated in the Dimes for Diapers program during April. The event, which started about 14 years ago and is coordinated by ABC-12 Flint and ELGA Credit Union, challenges students to collect change to purchase diapers for area needy. The diapers will be distributed through the Flint Diaper Bank later this year.
At the end of April a total of $5,706.30 was collected from Reid Elementary along with $3,306.45 from Oaktree Elementary.
Reid Elementary Principal Katie Jordan said the school had an amazing Dimes for Diapers collection this year. The DK-first graders total 270 students and yjr Community Education Preschool Programs includes about 100.
“Our students were very involved and even came up with great ideas of their own,” said .
Jordan provided a few enterprising examples of the Reid students methods of fundraising
Reid student Lincoln coordinated a can drive and raised over $60; Easton went door to door with a very well prepared speech netting more than $120 which included a $100 bill and Miles did extra chores around the house to raise over $200.

The Kelly Family donated a 200 pop-it toy. Tickets were purchased for $1 each.
“One dollar can buy seven diapers, enough for one day,” said Cheryl Sclater, ELGA Credit Union, public relations manager. “The need is great considering the county has about 4,500 children aged three and under living below the poverty level that need help.”
Every penny collected goes through the Dimes for Diapers to the Flint Diaper Bank.
“I never realized the need, but most Americans who have not faced this struggle personally are unaware the problem exists,” said Sclater. “Families unable to afford diapers are forced to choose from a variety of undesirable alternatives that can severely impact the health and well-being of their child. Many families report cutting back on basics such as food, utilities or child care in order to purchase diapers.”
Federal benefits such as Bridge cards for food or special supplemental programs like WIC cannot be used for diapers.