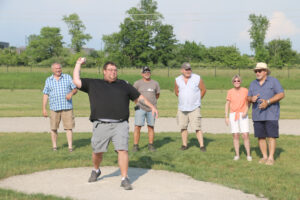 Road, Ortonville. The fields were built with grant money issued in 2017 as part of Phase two of improving the park.
“It’s been a long time coming,” said parks and recreation director Fred Waybrant. “The reason we built the little league fields is currently they’re playing on undersized fields at Sherman Park. They went from 160 feet outfield to 225 feet, which is the little league required field size.”
Brandon Township Supervisor Jayson Rumball threw out the first pitch. Also in attendance were staff members who worked on the grant and parks and recreation subcommittee members Dana DePalma and Roselyn Blair.
“That celebration is just celebrating the first game, we’ll have a grand opening down the road,” said Waybrant. “We’re also honoring four Brandon Township residents that helped with the construction and saved the township bundles of money.”
Construction on the fields started in 2019, but bids for the project came in almost $1 million more than originally approved in the grant and budgeted for.
“The whole project was under budget,” said Waybrant. “Roger Ingles, Brian Harrison, Dave Tippet, and Dan and Luann Mann all stepped up and contributed labor, machinery, funds and helped out. It couldn’t have been done without them.”
The baseball fields are one of three parts to phase two of the park, all of which have been partially funded with matching grants from the DNR.