By David Fleet
Editor
Lynne Wummel seeks adventure.
So after hiking 2,000 miles on the Appalachian Trail in 2017 to biking across nine states from Virginia to Oregon on the TransAmerican Trail in 2018, 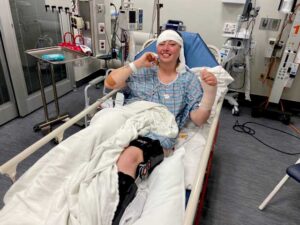 Wummel a 2016 Brandon graduate was prepared for the next quest to hike the Pacific Crest Trail covering 2,600 miles from southern California to Washington State over five months.
She was set for the next adventure to begin on April 11. However, trails, like life, sometimes have several unexpected paths.
“I had it all planned out,” said Wummel, who worked as a wilderness therapy field guide near Salt Lake City, Utah.
She would make a return trip to Michigan to visit friends and family in March, before heading west for the Pacific Crest Trial hike. On the way she stopped in Eagle, Co. to visit a friend Jack, who just happened to have the use of two snowmobiles.
On a clear cold morning, Jack and Lynne were snowmobiling through an area of heavy snow near Lime Creek located about 130 miles south of Grand Junction, Co., in the Vail Valley.
“I was approaching a bridge, when I started too far left,” recalled Wummel. “I was aiming to get back into the middle (of the trail) more, but it was too late. The snow on the left side of the bridge collapsed and I was free falling the 12 feet into the creek bed below. This is it, I thought, in addition to as much profanity that could escape during my fall. A part of me really thought that was going to be the end. There was a big boom followed by a loud crashing noise and I was suddenly in the creek.”
Wummel landed in about a foot of water.
“The coldness (of the water) felt amazing on a knee that had to be broken,” she said. “I looked to my left and the snowmobile was lying upside down in the stream, luckily three feet away from where I had landed myself. My helmet had taken the worst of the fall but had popped off after the initial impact, there was blood everywhere. I stuck my face into the surrounding snow and noticed the blood patches it left behind, but the coolness of the snow felt so nice on my bleeding head.”
Jack continued on snowmobiling and hadn’t noticed her fall.
“I mustered up all the strength I had within me and crawled through the stream, under the bridge to a patch of ice then began crawling my way up the snowy embankment that led down to the river,” she said. “I would post hole up to my thigh (in the soft deep snow) with my good right leg then painfully drag my broken left leg up to meet it in the snow.”
Wummel crawled hand over hand until I could get to where it evened out a bit and she could see more of the horizon.
“I was screaming for my friend, praying he would find me soon,” she said.
Right after the bridge was a series of trails heading off into different directions.

“I cried for help, for Jack, for anyone, I wanted to be rescued so badly,” she said. “I quickly realized however that the cavalry wasn’t coming. It was up to me. I was in survival mode and knew I would need to get myself out of the ravine that I had fallen into if I wanted to increase the likelihood and timeliness of him finding me. I assumed falling off the bridge was the last thing he would think that I did.”
Jack came ripping back around on his snowmobile, she said.
With Wummel’s broken leg floating off to the side she dug the good side of her head into the back of Jack so to stabilize it as much as possible for the hour long bumpy snowmobile ride back to the Sylvan Lake State Park.
“We would occasionally hit a bump that would make my broken leg hit off the surface of the snow and I would scream in agony,” she said.”
After about an hour and half of focusing on my breathing throughout the difficult journey, Jack and Wummel arrived back at the state park. . “I sobbed for the pain, I sobbed for the fear that I remembered looking down at the creek bed below, I sobbed for my foreseen inability to hike the trail I had been dreaming of for five years,” she said. “I also was sobbing because I felt terrible that I crashed my friends boss’s snowmobile. Despite all the grief and tears there was an air of radical acceptance at my situation and an intense gratitude for being alive. Jack drove me another hour to the hospital in Vail, Co. as I reclined in the passenger chair and focused on my breathing with intermittent periods of intense crying.”
At the Vail Health Emergency Room, doctors were waiting. The injuries included a broke knee, a complete fracture of the left tibial plateau, a fractured of her left trapezium (the bone that connects the thumb to the wrist), and stitches on a “scratch” that was deep enough to see bone on her elbow. The skull fracture prompted a two hour ambulance ride to a trauma hospital in Denver Health where she stayed five days.
Today Wummel is on the road to recovery, with some new fancy bling installed in her head and knee. The knee will be unweighted bearing for 6-8 weeks and will take about 3-4 months to fully recover.
“I imagine there will be plenty of hardship, grieving, pain, sorrow but also lots of gratitude, love, compassion, friendship and beautiful experiences to be had. I am confident that I will find and soak in all the silver linings,” she said.
“I look forward to observing what doors may open as a result of this experience and lessons that will come from it. The trail will always be there though, and the timing just simply wasn’t right for me this year, and who knows why.”