By David Fleet
Editor
Ortonville-Bill Duman had spent a lifetime either on the water or under it. 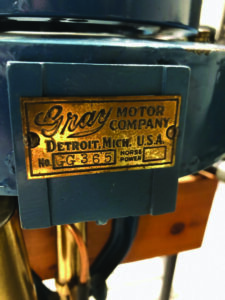 The Cheboygan native was a third generation hard-hat diver, served in the Navy during the WWII Battle of the Atlantic and completed countless hard hat dives in the Straights including under Mackinac Bridge following its construction in 1957. Bill and wife Nathalie moved to Ortonville in 1946 and he continued to spend the next 60 years working and collecting anything nautical.
Duman passed away in 2010, however, much of his collection remains in storage including several classic antique outboard motors.
The brass clad, single cylinder motors with a hand crank starter mounted on top, appear to be more of a work of art rather than propelling a boat across a lake.

“They were very costly and did not run well,” said Bob Shapton, of Grand Rapids-based Restoration Arts for Antique & Classic Marine Recreational products, an expert on old boats and motors. “The outboard simply replaced oars and sails. The outboard motor was first used for practical use such as mail delivery, going to and from ships off shore or hauling small cargo. It was not for pleasure use like today. The outboard was closely tied to the automobile industry in Michigan. It all goes back to portability, make that engine as small as possible. It was just a useful tool.”
As the outboard developed better materials such as aluminum was used.
“After about 1925 the outboard became a lot more practical,” he said. “Water pumps and just a more dependable motors developed since the early beginnings.”