By David Fleet
Editor
Atlas Twp.-John and his older brother William Britton both served in the Revolutionary War. 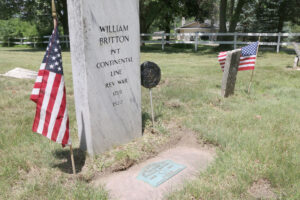 John was a private in the 5th Battalion, Philadelphia Militia, and fought in the battle of Germantown, Pa, Oct. 4, 1777 and in the Battle of Monmouth, NJ in 1778. Brother William enlisted in 1777 and participated in the siege of Yorktown and was present at the surrender of British Commander, Lord Cornwallis. On June 9, 1783, he was honorably discharged by General George Washington.
While the battles and duties of the two patriots differed their sacrifices for independence from Britain and the founding of a new nation remained. Both came to Michigan from New York in the early 1800s and settled in Atlas Township where they died just two years apart in the 1840s and are buried in the Horton Cemetery.

Patriots like the Brittons are not forgotten thanks to the efforts of the Daughters of the American Revolution. John’s grave was marked by the Genesee Chapter DAR Nov. 6, 1917, while William’s grave marked on Sept. 22, 1939.
“We wanted to show others where these graves are and give them the opportunity to carry on what we have started,” said Carol Powers, DAR member and Atlas Township resident.
For the past 14 years, Powers along with DAR member and Atlas Township resident Dawn Bastian take on a six hour road trip to visit all 13 Revolutionary War Soldier’s graves in Genesee County.
“It is so important for us to remember our past and honor it,” said Powers. “It was quite a journey but well worth it to be able to honor these soldiers so long gone but still in our thoughts and actions.”
So on June 30, Bastian and Powers along with Genesee Chapter DAR Regent, Jackie Howell and Corresponding Secretary Debbie Dietzel set out to honor these brave men, making sure the markers are in good repair, cleaning their stones, placing flags on their graves and remembering their service in founding this great land.
“Many of these soldiers lay beneath their original headstones but some of them passed over 184 years ago and their original graves have been lost to time,” said Bastian. “They are still honored by the DAR and SAR (Sons of the Revolution) with new headstones and brass markers.”
These new headstones and markers are placed next to family members, she said.
“These men fought to make a group of colonies into one nation,” she added. “Their sacrifices and life stories should not be forgotten.”
Some are buried next to sons who fought in the War of 1812 and grandsons who fought in the Civil War.
“Their service to our county runs deep in their families, ” she said.
Bastian has put together a booklet for members of the Genesee Chapter DAR of each soldier, his history, direct descendants and picture of his grave.
“This is a very valuable resource for others to be able continue to honor these important men in the history of our country,” she said.