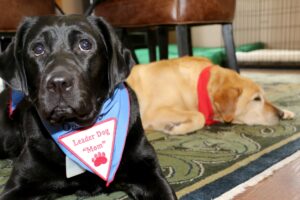 Oakley and Chanel of Brandon Township. The two are moms for Leader Dogs for the Blind of Rochester Hills. Chanel had four litters before she retired, and Oakley is pregnant with her third litter. Their litters go on to train as guide dogs. while the moms will retire and stay with the volunteer in their forever home. Photo by Patrick McAbee.

By Shelby Stewart
Staff Writer
Ann Bonds has had over 100 potential future guide dog puppies in her house.
For over 20 years, Bonds has been volunteering with Leader Dogs for the Blind of Rochester Hills. After her mother died, she said she came in contact 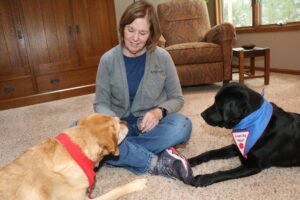 with three different service dogs within a month, and her mother always told her things come in threes for a reason.
“I just thought, this is three things, I’ve always wanted to do this since I was quite young, to work with dogs or train them so that they could help people,” said Bonds, a Brandon Township resident. “My friend at the time went to 12 Oaks Mall, and the Eyes Against Darkness puppy raisers group were there, and they gave me an application and I went home that night filled it out. 10 days later I had my first future Leader Dog puppy.”
She said after a year, when she would have to return a puppy to Leader Dogs for training, she would take a new one home that same day. After raising a few puppies, she decided to do something different and got into breeding and working with Leader Dog moms. A friend of hers had raised a puppy the same time she did, named Jett, and when they turned them in together, Jett was pulled for breeding.
After that, Bonds got to take Jett home. Jett went on to have 47 puppies over severn litters. She has had four leader dog moms overall that she saw through all their litters, and did emergency dog-sitting for two other leader dog moms that had gone into labor.
“Once they have their designated amount of litters, you host the dog for a lifetime,” she said. Currently the dogs will have four litters.
Her current two moms are Chanel, who is a retired leader dog mom and seven and a half years old, and Oakley, who is possibly pregnant with her third litter and is two and a half years old.
“They’re always looking for host homes for the breeding stock as well as the puppies,” she said. “They prefer a fenced in yard, but if you take them outside they have to be on a leash. Keep them fit, exercised, follow the protocol. And you have to accept the responsibility of taking care of the litter.”
The responsibility is more than just watching the dog give birth, she said.
“There’s a lot involved,” she said. “We do a neurological stimulation when the puppies are three days old until their 16th day. It stimulates their central nervous system, makes them a good, sound guide dog.

It’s just a three second, you hold the puppy in the palm of your hand, then you hold them upside down, tickle their little toes, only three seconds. You do that once a day.”
At 28 days old, the puppies are able to have visitors, and on the Monday or Tuesday of their second week of age, they go to Leader Dogs to be put in a host family for a year. Following that year they undergo training to become a guide dog. Some of them that go through basic training are pulled for breeding.
Bonds says she has had over 20 litters, which amounts to over 120 puppies.
“Watching those puppies develop their instincts, they are just so smart,” she said. “And the Leader Dog moms, I can’t tell you how much I learned and how much I am still learning from them. Once you bond with a dog, you can actually read them.”
She calls Chanel, named after the perfume Chanel No. 5 as she was the fifth Leader Dog puppy raised by the woman who raised her, a super mom.
“Her last litter I got a call from my boss saying there was another Leader Dog mom who had a litter, really didn’t want to tend to her puppies,” she said. “She was keeping an eye on them, but she had all yellow labs and one black lab, and by the third day she wouldn’t have anything to do with the one black lab, so they brought her to me.”
Bonds was told she would have to tube-feed the puppy every 3-4 hours, and hopefully Chanel would foster the puppy over time.
“So, before they arrived, I looked at Chanel and said ‘you’re getting another puppy even though you have eight.’ This was number nine that wasn’t even hers, she had eight puppies of her own,” she said. “They bring over this little black puppy, tiniest thing I’ve ever seen, and I said well let me get her out of her box away from the other puppies, laid her down on the rug, and she looked at that puppy and nudged the puppy right to her and the puppy latched on and started nursing.”
She said the other puppies accepted the new one as well and she raised it with her litter.
“The first two litters we had, I returned them, and I sobbed, I cried, and at that time Cathy who was in charge of the breeding department, she cried with me,” she said. “It was sad. The third time, my Leader Dog mom was sitting on the chair in the living room, looking out the window waving ‘adios kiddos, good luck’, and I was okay with it. It’s a lot of work, I won’t lie, it’s a lot of work.”
While it is a lot of work, Bonds says how important it is to have host families for Leader Dogs and Leader Dog moms.
“They (Leader Dogs) start with these guys, the moms, so we do our best for those six and a half weeks, getting them ready,” she said.
Leader Dogs for the Blind has recently expressed a need for host families, both for breeding stock and puppy raisers.
“Currently, Mother Nature has been very good to Leader Dog by providing large litters of adorable Labradors and Labrador crosses,” said Rachelle Kniffen of Leader Dogs for the Blind. “This means that new volunteer puppy raisers are urgently needed.”
A puppy raiser gets to spend a year with a puppy, helping it get ready for formal guide dog training. Those skills include walking calmly on a leash, ignoring distractions, moving confidently through busy environments and properly greeting people.
“Other benefits of this volunteer position include helping someone who is blind become more independent and confident in their travel, meeting like-minded people in your community, having a daily walking partner and feeling good about giving back to your community,” said Kniffen.
To learn more about volunteering, go to leaderdog.org and click on the volunteer tab or call 888-777-5332.