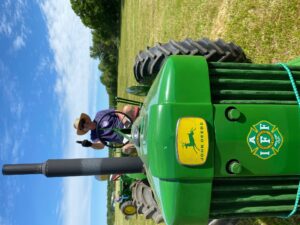 Tractor Club for the annual Plow Day.
About 13 antique area tractors prepared 12 acres of farm land for pumpkin planting this spring.
Ron Felix, of Brandon Township dropped a 16-inch, two bottom plow down, pulled by a 1964 John Deere 10/10 tractor.
“People still love to see the old iron work out here,” said Felix. “There are a few small farms around that plow, but on a very small scale now.”
James Schweikert of Oxford is the President of Yesteryears Tractor Club. On Saturday he was driving a 1974 Minneapolis-Moline pulling a four bottom-16 inch Oliver plow.
“For many people it’s all about the nostalgia of the old tractors,” said Schweikert, whose grandparents were farmers. “The majority of the visitors were not farmers but many remember them growing up especially in the 1950s. Back then tractors and agricultural was more prevalent. It’s like checking out old cars.”
Plowing fields is not practiced as much by farmers today, he said.
“Plowing is just not as efficient as other forms of tillage,” he said. “The soil health is better by not plowing and it’s a lot less wear and tear on equipment.”