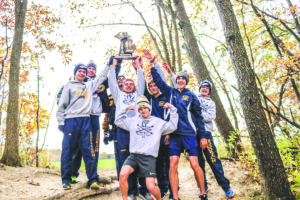 On Oct. 26 the Martian Boys Cross County team brought home the schools first ever Regional 16-2 championship. The team competed at Linden. The win qualified the team for state championships at Michigan International Speedway, Brookland on Nov. 2.
“It’s a great group of kids,” said Warden. “They work hard, but we push really hard. It’s about attendance, attitude, grades we try to mix it up. If you’re not having fun you’re doing something wrong, no one sits on the bench on this team. We race everybody, off season and during the season. It’s on us as coaches to get better each day. If we don’t improve we can’t expect the runners to improve.”
The team finished second at Regional in 2018 and 12th at states.
“It’s been a journey,” he said. “Many of these runners have been with us for six years they also did not go to regionals until their junior year.”
Keys this year include a change in philosophy; longer practises from 11/2 hours to 2 hours 15 minutes; yoga; parental support and community support.
“Residents leave water bottles out along the road in the Hadley Hills were we run in the summer months,” said Warden. “It’s such a small gesture but so very important the kids. It’s like someone looking out for them.”