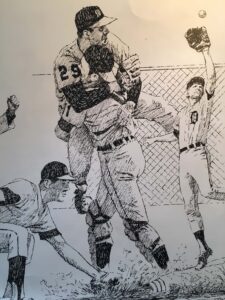 Cardinal Lou Brock, who arrived full-speed standing up into home plate.
The out was key in Game 5 of the 1968 World Series, when the Tigers were down by three games to the Cardinals. The Tigers would go on to win a dramatic World Series.
Freehan was diagnosed with dementia in his later years. In October 2018, it was revealed Freehan was in hospice care at his home in Northern Michigan.
He died on Aug. 19, 2021, from the disease.
He was 79.
Freehan played his entire major league career from 1961-1976 of 15 with the Tigers which included 11 All Star games, five Gold Gloves and four times he led the league in games caught, with a high of 147 in 1967.
Bill Haney, a Brandon Township resident and long-time author, was an acquaintance of Freehan.
“In 1984, I talked long-time Tiger broadcaster Ernie Harwell into writing “Tuned to Baseball,” which turned out to be the first of eight books he would write in his post-announcing career,” said Haney.

“Ernie and his wife Lulu became close friends and invited us to the wedding of daughter Juli, where we sat at the reception with Bill and wife Pat Freehan”
Also at the table was a man who knew nothing about baseball and asked me who Freehan was, recalled Haney.
“I explained that he was a great catcher for the Tigers, one of the best in the history of the game,” he said. “What made him so good?” the man asked.
“Well, he was great defensively,” I replied. “And he was a fine hitter all his life, even before the major leagues. When he was at the University of Michigan he set the all-time batting record, hitting .500 in the Big Ten.”
The Freehans had been talking with Marcy and I didn’t know that Bill had overhead me.
“Actually,” Freehan said. “It was .585 and the record still stands.”
That was 30 years ago and Freehan was right–it is likely a record that will never be broken.
Haney shared some of his memories of Freehan.
“Bill never regretted that he left the University of Michigan after his sophomore year to take a $100,000 bonus to sign a contract with the Tigers,” said Haney. “Still, he would have liked to finish a college career in which he starred in baseball and was a pre-season All-American in football.”
Freehan got an opportunity to do something important for his alma mater in 1989.
The Wolverines had enjoyed phenomenal success from 1979-1988 under Head Coach Bud Middaugh with ten consecutive conference championships. But Middaugh was dismissed by UM because of coaching violations. The stained program was in chaos when Freehan took leave from his manufacturing business to take over a program reeling from the scandal. Freehan successfully guided it for the next seven years to restore it to respectability.
“Since that time the UM Baseball program has continued to develop,” said Haney. “It’s evident from Michigan’s recent trip to the NCAA National Championship game in 2019.”