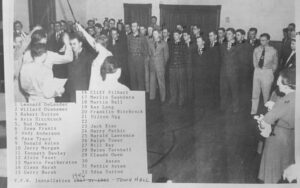 Editor
In the late spring of 1945, Ron Sutton recalls the war in Europe was going well for the Allies.
“The news on the radio was real good—we were winning,” said Sutton, 91. “When the announcement came it was over and Germany was defeated we really were not all that surprised.”
Sutton, an Ortonville resident was just 16 years-old when Allied forces declared victory in Europe on May 8, 1945. Today, marks the 75th anniversary of V-E Day which came at a steep price for American troops with more than 400,000 deaths during WWII. These WWII veterans, often called the Greatest Generation, were everyday men and women who put aside families, schooling, and jobs to answer the call and serve their country.
Of the 16 million Americans that served in WWII, only an estimated 250,000 veterans are still alive. That number declines with each passing day.
Locally, Dane Guisbert and Howard Brandt served in the Army during World War II. The pair are the last two WWII veterans that are members of Ortonville VFW Post 582. Guisbert served in the South Pacific while Brandt was in France.
When the Post 582 was chartered in 1984 more than 200 veterans joined, said Dennis Hoffman, post commander.
“At that time—36 years ago we had 72 World War II veterans—about a third of our post members,” said Hoffman, who served in the Army during the 1960s. “Now it’s down to two. Their sacrifices and others created the freedoms we have today.”
About three months after Victory in Europe came the surrender of Imperial Japan was announced by Japanese Emperor Hirohito on Aug 15 and formally signed on Sept. 2, 1945, bringing the hostilities of World War II to a close.
“When the war ended in Europe many of the men serving figured they going to head to the South Pacific,” recalls Sutton. “Then I remember the music stopped and a man came on the radio and said the war was over in Japan and all hell broke loose around town.”
Sutton was working at his fathers Sinclair gas station in downtown Ortonville at the time
“My folks were on vacation and we closed out our station,” he said. “Everyone celebrated. I remember driving to Pontiac and the streets were full of people. The girls were ready to dance. It was a big celebration.”