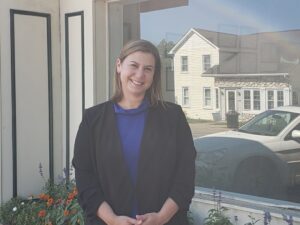 Livingston, and North Oakland counties. Slotkin was elected in 2018 to Congress, although losing in Oakland County and all but one precinct in Brandon Township. Slotkin, 44, is a Holly resident and will seek reelection in November.
“The model I try to aspire to is Sen. Carl Levin,” said Slotkin. “There was a lot of people that did not agree with Levin on many things. And they will tell me they did not agree with him, but he had integrity so they voted for him. I know a lot of people around here are not going to agree with me on a number of issues. But, I hope that by being out there, being visible, talking to people and answering any question they want—even if they are tough, they will see I’m not hiding away in some corner. I’m willing to answer their questions and that I make my decisions based on principle and oath of office. That is what I can offer people. If that is want they want in an elected official I hope they consider me. I was never looking to be a member of Congress, I was off in the CIA and the Pentagon. I’m open and transparent. I knew Congress was screwed up before I ran. But if we don’t care about it, who will?”
Slotkin recognizes that 8th District communities such as East Lansing and Ortonville are vastly different.
“No one is going love every single thing I do,” she said. “It’s impossible. But if you care about a new generation of leadership who just understands they are public servants I hope they give us a shot.”
Like many lawmakers, Slotkin continues to respond to constituents regarding the battle with COVID-19.
Recently, she unveiled her Made in America Medical Supply Chain Initiative after weeks of working with district health care providers to find sources for those desperately needed medical supplies. Michigan, explained Slotkin, experienced dire shortages of personal protective equipment, encountered difficulty in accessing personal protective equipment (PPE) from the SNS, or received supplies that were expired, putting front-line providers at risk.
“It’s about our national stockpile,” she said. “We need more American made products in there, and when we got our (Michigan) stockpile it was expired, some of it was moldy.

“It was not good. Most comes from China. In the middle of COVID I was haggling with a Chinese middle man trying to get a 78 cent mask for our nurses. Something is wrong here. This should not be political.”
Currently nine Democrats and nine Republicans join Slotkin on the bill to boost domestic manufacturing of critical supplies to fight COVID-19, protect our medical supply chain as a matter of national security. As of press time Thursday the bill is out of committee and should be on the floor of the U.S House by early August.