TENNISWOOD, RICHARD JOHN of Rochester Hills, Michigan; went to be with his Lord on September 12, 2021. He was 89. 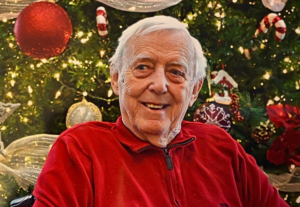 Richard was born at home on June 22, 1932 in Yale, Michigan to the late Ralph Lee and Anna Beatrice (nee: Craig) Tenniswood.  He married Joyce Anne Reynolds on May 20, 1961 in Royal Oak, Michigan.  She preceded him in death on January 14, 2016 after 55 years of marriage. They spent many wonderful years wintering at Ramblers Rest Resort in Venice, Florida. He is survived by one son, Alan (Monika Hole) Tenniswood; one daughter, Lisa (Roy) Langolf; two grandsons, Zachary (Maegan) DeLeary and Tyler (fiancé Kaitlyn Barber) DeLeary; one brother-in-law Robert (Connie) Reynolds; also survived by many nieces, nephews and great nieces and great nephews;  he was also preceded in death by his twin brother, Robert (Nancy) Tenniswood, one other brother, Ralph Laverne (Linda) Tenniswood, two sisters, Irene (Ira) Bullock and Erma (Nelson) Sabin, his sister-in-law Sylvia (Raymond) Thornton.  Richard was a 1950 graduate of Yale High School and still proudly wore his letter sweater.  Upon graduation he went to work for Pontiac Motor for 40 years as a Quality Control Specialist.  At the age of 22 he and his twin brother built the home that he and Joyce resided in until her passing in 2016.  They also built a duplex in Rochester that his twin brother lived in.  Richard was the past-president of the National and State of Michigan Twins Association and remained very active for many years in twin conventions.  He and Robert were featured on the Today Show, the cover of People Magazine, National Enquirer, Oakland Press and numerous other publications. Richard and Robert were so closely connected that they had a heart attack just minutes apart while both were mowing the lawn. His church and family were his greatest joys. He was a founding member of Meadowbrook Christian Church, 2741 Walton Blvd., Rochester Hills, Michigan where his funeral service will be held on Friday, September 17, 2021 at 11:00 a.m.  Mr. Mike Tingley, officiating.  Interment will follow at Van Hoosen Jones-Stoney Creek Cemetery, Rochester Hills.  Family will receive friends on Thursday from 4:00 – 8:00 p.m. at VILLAGE FUNERAL HOME, 135 South Street, Ortonville, Michigan and from 10 – 11 a.m. on Friday at the church.   Memorial contributions may be made to Leader Dog for the Blind or Meadowbrook Christian Church. Envelopes are available at the funeral home. To send a condolence to the family please visit www.villagefh.com