By David Fleet
Editor
Yurij Cherstylo frequently contacts his aunt Oksana who resides in Lviv, Ukraine, about 40 miles west of 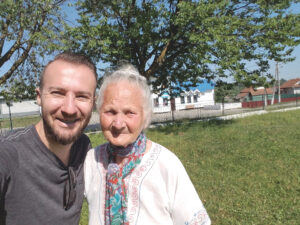 Poland. There’s a seven hour time difference from Michigan to Eastern Europe Time.
“My aunt tells me that whenever an air raid strike is near, the sirens go off,” said Cherstylo. “It happens often and is most scary at night time. The country is on edge.”
Oksana’s fear has been ongoing since the Feb. 24, 2022, unprovoked invasion of Ukraine by Russian forces, sparking an armed conflict in Eastern Europe. Now, more than three months since the invasion thousands of Ukrainian soldiers battle to defend their borders. Civilians, like Oksana and her family are pulled into the turmoil.
Cherstylo, 32, a Ukraine native and Michigan resident stays in close contact with family members who reside in the war-torn country. His aunt and other family members often share their struggles coping with the conflict.
There have been a few missiles that have hit near the Lviv area, he said. One recently hit a small airport.
“All are safe, the west side near Lviv (of Ukraine) is not as much of a war zone as East (Ukraine) closer to Russia,” he said. “We continue to keep in touch over social media.”
Other family members which includes an aunt, two first cousins, godfather and 91-year-old grandmother live in Western Ukraine near Poland. His wife, Julia, has four aunts also living in Ukraine.
The Cherstylo family left the Ukraine more than 25 years ago.
In 1997, Yurij Cherstylo was seven years old and his sister, Bohdanna was two, when his family moved to Hamtramck from Lviv. With the help of family living in Michigan, the children’s father worked at a Farmer Jack and mother stayed at home.
“We were fortunate to get the opportunity that America gave us to build ourselves up,” he said.
Since severing ties with the Soviet Union in the early 90s, Ukraine oscillates between influences of Moscow and the West’s democracy. Cherstylo recalls growing up following the collapse of the Soviet Union.
“Growing up, there was not much economic opportunity in Ukraine since Russia had a lot of influence on everything,” he said. ‘There was a lot of corruption at that time, the economy was state run so after the fall there was just no government. It was very unorganized.”
Cherstylo earned a degree in dentistry from University of Detroit Mercy. He stepped in earlier this year at the Village Dental Center, 8027 S. State Road, replacing Dr. Steven J. Turner who retired after 34 years of practice.
While now established in Michigan, Cherstylo remains entrenched with many in Ukraine.
So far the attacks have been tactical in the Western Ukraine, he said.
“Families are getting torn apart, women and children flee or are evacuated,” he said. “There’s a fear of uncertainty. Men under 60 are not allowed to leave the country, they are pulling men into training for the military.”
The children are not attending school, prices are all raising and people are trying to go about their business.
“They have to make a living and go about their life,” he said.
Cherstylo said most civilians have not armed themselves following the outbreak of war.
“Initially, the Ukrainian government was giving out arms to males 18-60 years old,” he said. “Some may have them, on standby,” he said.
Assistance for Ukraine.https://umana.org/ – Ukrainian Medical Association of North America
https://m.facebook.com/UMANA-Michigan-109786361704824 – facebook page of the Michigan UMANA chapter