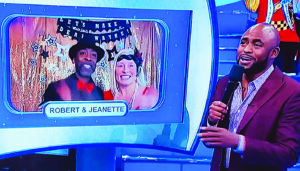 Let’s Make a Deal, hosted by Wayne Brady.
“My husband Robert is a huge fan of the show, so I applied online to try to get him on the show,” said Jeanette. “They contacted him within a few hours. It was never my plan to be on the show, but when they called, he asked if his wife could join him and they said ‘sure.’ We just had to do a couple zoom interviews.”
When asked what Ortonville is known for, the Stallings gave the answer: liquor stores.
“Funny thing is, we don’t drink,” said Jeanette. “But we do buy our lottery tickets from several of the wonderful stores in town. From all the comments online, most thought it was funny and lighthearted. We love living in Ortonville and have nothing but wonderful things to say about our community.”
The game they played, called ‘Smash for Cash’ had the contestants smashing piggy banks that contained up to $20,000. But, if contestants get two ‘Zonks’, or empty piggy banks, they lose everything.
“We walked away with $3,000 after the first one,” said Jeanette. “Overall our experience on Let’s Make a Deal was positive and lots of fun.”