By Shelby Stewart
Staff Writer
Ortonville-On Monday night, the village council voted 7-0 to approve a resolution that the village is interested in applying for another Michigan 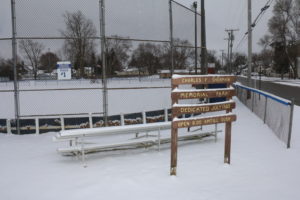 Department of Natural Resources grant.
“We will be eligible for grant applications for this calendar year,” said village clerk Liz Edwards. “After discussions with trustee (Pat) George and Fred Waybrant, now would be a good time to apply for a grant to update the backstops, the fencing, that really make our ballpark exceptional.”
The grant application would cover possible funding for the fencing at the baseball fields in the village, improved backstops, as well as asphalt for the basketball courts.
“It simply states we are interested in applying for another grant,” said Edwards. “The dollar amount I’ve given is an estimate only, I don’t think it will be that much, but it lets the DNR know that we are intending on applying for another grant this year.”
The estimated $50,000 would have a 30 percent match, which means that the village would be responsible for $15,000, though both Edwards and trustee Pat George said that number was a rough estimate and felt a bid would be lower than that cost.
“Those are ballpark numbers,” said George. “The type of grant is exactly the same type of grant that Liz got through on the concession stand, so that’s a 30 percent match from us.”
The official grant application is due April 1, and if approved, the project would be for the next fiscal year and would be budgeted for.