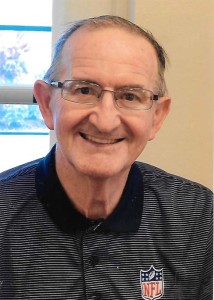 of Sun City Center, FL formerly of Ortonville; died April 22, 2016.  He was 76.  Born April 13, 1940 in Chicago, IL to the late William D. and Margaret (nee: Illingworth) Walker.  He is survived by his wife, Sheila Ann Walker; two children, Rocky Alan Walker and Michael David Walker; five grandchildren, Brittney Walker Vandenbussche, Bradley, Benjamin, Mason and Owen Walker;  one sister, Barbara Letcher; he was preceded in death by one brother, John Murphy.  William was a Labor Relations Director with Champion Spark Plug.   He was veteran of the U.S. Army and played professional football in the Continental Football League with the Charleston Rockets from 1965 to 1967.  While living in Ortonville he was President of the Brandon Touchdown Club.  Funeral service will be 10:00 a.m. Saturday, April 30, 2016 at VILLAGE FUNERAL HOME – ORTONVILLE.  Interment will follow at White Chapel Cemetery.  Family will receive friends on Friday     from 3 to 9 p.m. Memorial contributions may be made to Life Path Hospice or Alzheimer’s Assn.  To send a condolence visit www.CoatsFuneralHome.com