By David Fleet
Editor
Atlas- Private Eli Jennings’ letters home to his wife Nancy provide a glimpse of the life of a Union Solider. 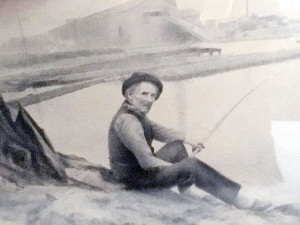 Four letters penned in 1863 during the Civil War by Eli and one from his wife Nancy to her sister were recently shared by long time Ortonville resident Ron Sutton. Eli is the great grandfather of Mary Lou Cooper (Sutton), Ron’s wife and Donald G. Cooper her brother.
Sutton recalled comments from family members who knew Eli.
“The family members said Eli’s health was never good after he returned from the Civil War,” said Sutton. “The letters from Eli were passed down through the years,” said Sutton. “It’s time we share them with others.”
Eli was born in Atlas in 1837 he married Nancy Johnson on Feb. 8, 1857. He enlisted in the Union Army and reported to Lapeer on Aug. 4, 1862 then to Detroit as part of Company K of the 4th Michigan Cavalry Division. After training Co. K left Michigan with an enrolment of 1,233 officers and men on Sept. 26, 1862, for duty in Louisville, Ky. Among the men who served in the 4th Michigan Cavalry was James Vernor, Sr., who after the war became a well known pharmacist and the developer of Vernor’s Ginger Ale.
Eli’s letters home were written following the Battle of Stones River fought from Dec. 31, 1862 to Jan. 2, 1863, in Middle Tennessee, near the town of Murfreesboro, Tenn.

According to Eli’s declaration for pension, on Oct. 14, 1863 during a march near Louisville his horse fell on him injuring his spine resulting in paralysis of 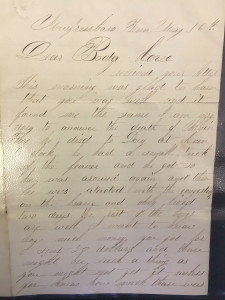 the lower extremities. The results was gangrene of both legs. He was discharged Sept. 8, 1863. He returned to Atlas and died at the age of 59 on July 14, 1897. According the Genesee County Census of 1890 the Jennings’ property was worth $2,800. The couple had four children of Ulysses S. Jennings (1865-), Etta Jennings (Jones, 1869-), Lulu L. Jennings (Richmond, 1873-1947) and Maggie M. Jennings (Ries Straley 1875-1946).
Following Eli’s death, his wife Nancy petitioned government to have his Civil War Pension continue. The request was denied.
Check out other letters at thectizenonline.com. Shelby Stewart contributed to this story.

I received your letter this morning, was glad to hear that you was well and it found me the same. I am very sorry to announce the death of Alvin Fox. He died today at seven O’clock. He had a small touch of the fever and he got so he was around again and then he was attacked with the congestion of the brain and only lived two days. The rest of the boys are well. I want to know how much money you got, for I sent 50 dollars and there might be such a thing as you might not get it unless you knew how much there was. I would sorely like to see you, to see how you look. God damn John Seymour, I would bust hell out of him if I ever meet him. God damn drives on me you know. It is very pleasant here now. Ansel never shows me any of the letters that Ada writes to him. He used to show them to me. I will give him hell the first time I see him about his little butternut wife. I think Ansel had better hush her up. I should think she would’ve been ashamed to ask Kiff for an order. I don’t want you ever to do such unless you get to be a butternut, then I don’t care what you do. I can’t think of anything more to write.

Oh, yes, I went out to ______ yesterday and the Rebs gave me a hell of a chase. There was only two of us and thirty of them. They chased us to our pickets and then the pickets let into them and they lit out. So they got cheated out of this chicken for they thought they was sure of me.

Write as soon as you get this, if you please.

Your kind letter found me today enjoying my rations tolerable like. I thank you. Tell Philadelia to get John if she can. I wish you would send me a piece of her wedding dress. Tell Cale not to get  spliced until I get there, for I want to see the ______. Tell _____ to raise hell for me with ____.

I can’t think of anything new to write. I wish you would write oftener, twice a week or more. Give my love to all. Daniel and Sarah is mad and I don’t care a damn for I have not had but worse from him and your father never has wrote to me yet. I never write but once to anyone you know if they don’t answer it. I have had a number from John and Julia. Good bye, Write soon.

I accept your kind invitation to the dinner with great pleasure in the world. We are going to have a dinner at Nashville. And I should be very happy to have your company. But as circumstances won’t admit of I cannot accept your kind invitation for I leave for Jeffersonville tomorrow the third. When I get there I will write again. I am now in the general field hospital. Have good times as can be expected. I feel very well today.

I can’t think of much more to write this morning, only it is very pleasant this morning. I have not heard from Ansel since he left for Nashville now where he is. I suppose Ada knows where he is. One of the boys in my company was shot the other day in the leg.

It is impossible for me to get my picture took here now, but I will have it took and fetch it to you. I suppose that will do as well, so goodbye, until I hear from you.

I thought that I would write you a few lines and let you know that I was some better. I have got as far as Nashville. I shall rest a spell and then go to Louisville, for the doctor thought that would be the best for me because they was so full at Murfreesboro. He said that he would send my papers to me as soon as they was done. They was so busy that they would not do it while I was there. And I don’t care whether I get them or not because I can’t do anything and now I get thirteen dollars a month and board and clothes. That is more than I would get at home and I am contented and that is half of the feud. Ansel is here in hospital  No. 14. I did not see him, I saw worse of the boys that knew him. I have plenty to eat and that is good enough for my body. Tell Dad he needn’t come after me yet. Wait until I get to Louisville.

You may direct your letters to Eli J. Jennings, Hospital No. 2, Nashville Tennessee.

It won’t make any difference whether I get it here or somewhere else. It will follow me wherever I go. So  send a letter to me as soon as you please.

P.S. Did you get that watch I sent you?

A letter from Nancy Jennings to her sister:

If I may so call you, your letter found me in the hospital not far from Eli. He is a good deal better so that he can walk around with a cane if he don’t get any pull backs he will be around again in two or three weeks. That is so that he can walk as well as ever but I don’t think he will ever be able to ride in the ranks again. I think he will be sent north or else he will get his discharge and perhaps both. I am some better today but I don’t know how long it will last. If they would send us north for 30 days it would do us more good than all the medicine the doctors could give us in one year. They don’t come around only now and then and then they don’t do much. The doctor has just been here and ordered me to get ready for Nashville, so you will have to excuse my short letter. Eli is all right. If there is anything more, I will write it. No more this time.

This from your friend,