By David Fleet
Editor
A local driver continues to race toward NASCAR fame. 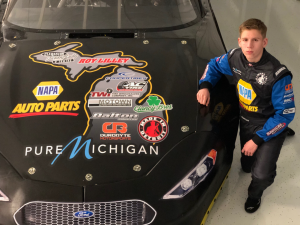 Michael Clancy, Jr., a 15-year-old Brandon High School freshman, recently finished second in the Jegs All Star Tour Championship 2017—the youngest ever finish that high up in the series.
Clancy, Jr., along with his father, Michael Clancy, Sr. started racing career at an early age.
His first vehicle of choice was the .25 midget car, a quarter the size of midget racer which lap the 1/20 mile track in often under five seconds. Clancy, Jr. had competed at Waterford Hills Quarter Midget track for seven years and earned the Gen Next Western and Eastern championship trophies, to be added to the hardware already lining the walls at AC Tire as well as at home. At age 12 he stepped up to full-size cars and in May 2015 Clancy, Jr. took on Owosso Speedway. Due to his age, Clancy, Jr. is allowed to compete only in the short track— any track under a mile. He will continue short track until he is 18-years-old.
2018 looks to be a big year for Clancy, Jr.
Last December, Clancy, Jr. flew out to California to test with Bill McAnally Racing, said Clancy, Sr.
“Bill owns the number one NASCAR K&N Racing Series team,” said Clancy, Sr. “Michael was to test in a car that was heavier, more horsepower with a new team on a new track that he had never been on and he did incredible. Bill and the team were very impressed and are trying to find a way to sign him.”
Clancy, Jr. starts the 2018 season going back to New Smyrna, Fla. for the World Series of stock car racing. He recently signed a deal with NAPA Auto Parts as his primary sponsor and MadeInDetroit has signed for their third year in a row.
“He will be running a special Michigan themed hood with all the Michigan companies that are sponsoring him to be there,” he said. “He is trying to make Michigan proud.”