BHS Feminist Club raises over 2,500 period products for ‘I Support the Girls’

By Shelby Stewart-Soldan
Staff Writer
Brandon Twp. — One in three low-income women miss work, school and outings because of a lack of 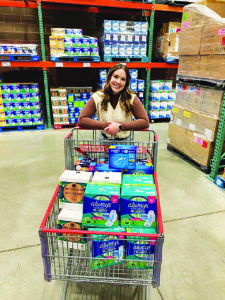 period supplies, according to the Alliance for Period Supplies.
“Period poverty is a really important issue that people don’t talk about,” said Lily Harvey, president of the Brandon High School Feminist Club.
Period poverty is when someone struggles to purchase period supplies due to lack of income, which happens to one in four women. It’s statistics like these that drove Harvey and the BHS Feminist Club to host a period products drive this year.
“All of the products went to the I Support the Girls Charity, and they will distribute them throughout metro Detroit area,” she said. “We had the collection going to a week, and then at the end of the week was Septemberfest. We had a booth at Septemberfest and got a lot of donations that way. It was really cool to get a lot of support through the community.”
Over the course of a week, the BHS Feminist club was able to raise over 2,500 period products for donation.
“I would just like to say thank you very much to everyone who donated or just showed their support,” said Harvey.
To get involved, visit BHS Feminist Club on Facebook, Instagram, or email brandonfeministclub@gmail.com.

One Response to "BHS Feminist Club raises over 2,500 period products for ‘I Support the Girls’"