By Shelby Stewart
Staff Writer
According to Stephanie Jones, finding another woman in Michigan who had a baby via surrogacy is like finding a unicorn. 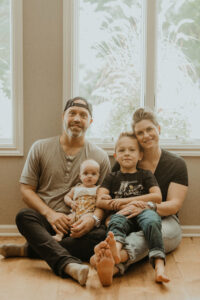 “People hear surrogacy, they think Kardashians, they think celebrities, they think California,” said Jones, a Goodrich High School graduate. “It’s not abnormal, and in some states, it’s common.”
Surrogacy is the term for when another woman, a surrogate, carries a baby for another person. In most cases, the baby has no genetic connection to the surrogate.
The reason Jones has a hard time finding other people like her who had a baby via surrogacy is because Michigan is the only state that that has a ban on surrogacy contracts.
In 1988, there was a court case in New York, nicknamed the ‘Baby M’ case. The couple who wanted to have a baby via surrogacy, which in the 80s meant that the surrogate was also an egg donor, had a contract with a surrogate. After the birth of the baby, the surrogate decided to keep the baby and a court case ensued for parental rights for the baby. The state of Michigan did not want a similar situation, and passed legislation to not recognize surrogacy contracts.
Last year, New York put an end to the surrogacy contract ban, but Michigan has done no such thing.
“I think a lot of people don’t even realize the law exists,” said Jones. “I know it sounds silly, but it’s really true.”
Jones has a seven year old son, and when she and her husband decided to expand their family, she experienced what is called secondary infertility, which is the inability to get pregnant or carry a baby to full term after previously having a baby.

After discussing options, they decided to pursue surrogacy out of state.
“We went through surrogacy out of state because of the laws in Michigan, and our daughter was born in May,” she said.
After her experience, Jones started the Michigan Fertility Alliance in an effort to collect stories of other families that have gone through surrogacy in Michigan.
“The alliance, at this point, we are just trying to be an organization that can start collecting these stories and be a bit of a resource for people,” she said. “There are so many people in this state that have really touching stories. And you typically have a story, because you didn’t just arrive on surrogacy because you wanted to. Surrogacy is because you are unable to have children.”
Jones says she has received many stories, but because surrogacy is so uncommon in Michigan, and because it is such a personal subject, many people don’t share their stories.
“Without stories like mine, and others, we really lack the human element to how this is really impacting people in our state, that’s what I want to emphasize,” she said. “I think our goal is to support an organized effort to change the laws. We understand that it’s the long game and a lot of organization. Of course our goal is to support future change, but people want to go from A-Z right away. But we have so many places to go, A to B to C all before we get to Z.”
Jones hopes that she can be a resource for other families going through what she did, since there aren’t many resources out there.
“If you go out of state, it’s so financially unattainable,” she said. “I kind of made a vow to my daughter and families just like us being discriminated against because they are not physically able to have a child. I made a vow to be a support and resource for these families.”