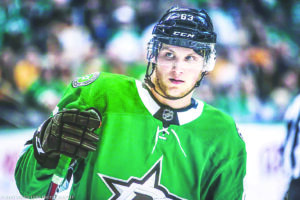 defenseman Ortonville native Ben Gleason to a one-year, two-way contract which will run through the 2022-23 season.
“I wanted to be back in Dallas,” said Gleason, 24. “I was excited they wanted to give me another chance, have fun and play the game I love every day. It’s my job, and I’m ready to compete for a spot on the team.”
Gleason finished the 2021-22 season with a career-high 44 points (9-35=44) in 70 regular-season games for the Texas Stars, Dallas’ top development affiliate in the American Hockey League (AHL).
Gleason’s chance for making the Stars blue line improved when defenseman John Klingberg recently signed with the Anaheim Ducks leaving a vacancy.
“We were the same player and a big opportunity for me with Klingberg with the Ducks,” he said. “It’s every kid’s dream to play in the NHL. It’s actually easier to play in the NHL, because everyone is in the right position at the right time. If you’re not, you’re scored on. That’s how it is. Everyone has their heads up and there’s always big hits, or fights.”
Gleason will report in September in the Dallas camp.
“They can’t give me a spot,” he said. “I have to earn it. Last year was my best year so far and I will build on that.”
His 44 points ranked fifth among all AHL defensemen, leading Texas defensemen and ranking fifth among all club skaters. He also ranked sixth among AHL blueliners and led all Texas skaters in assists (35) and ranked first among club defensemen in goals (nine). Gleason led Texas defensemen with two power-play goals and was the only defenseman to light the lamp in overtime.
Gleason has appeared in four career NHL contests during the 2018-19 season, registering one assist (0-1=1) with 14:53 ice time per game.
The 6-foot-1, 185-pound was originally undrafted and signed with Dallas as a free agent on Sept. 13, 2018.