By David Fleet
Editor
When the final out was tallied on a cool early May afternoon—Bob Foreback officially joined an elite group of high school baseball coaches and reached a pinnacle in a stellar career. 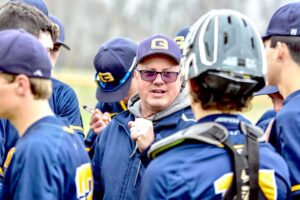 On Monday night, the Goodrich Martians shut out the Lake Fenton Blue Devils 12-0 in the first game of a doubleheader to notch coach Foreback’s 700th win at Goodrich. The Martians went on to win the nightcap 7-0, lifting the 2022 season to 15-0 and 10-0 in the Flint Metro League, the best start ever for a Goodrich baseball team. Foreback’s 701 wins landed the veteran coach in the top 17 all time in the state.
“Baseball is an individual sport wrapped up into a team sport,” said Foreback. “It’s the hitter versus the pitcher or the catcher and a runner on first base leading off ready to steal second. But, still it’s about the team—and the American pastime.”
In June 2017, Foreback was inducted into the Michigan High School Baseball Coaches Association Hall of Fame.