Stars come out for Bullies Reality

By Shelby Stewart
Staff Writer
Goodrich-The middle school hosted the Bullies Reality team on Nov. 13. —a one-on-one with stars and their battles with bullying. 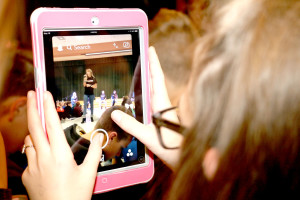 The celebrities who shared their stories included James Huling from Big Brother, Delaney Henderson from the Netflix documentary ‘Audrie and Daisy’, Jackie Isabel Ibarra from the Amazing Race and Big Brother, Vivian Hicks recording artist, actress and model and Erin Kirby singer and actress, as well as the president and CEO of Bullies Reality Tim Levasseur.
Bullies Reality works with schools, like the middle school, worldwide by creating new bullying programs and policies for both the bully and kids who are being bullied.
“Just come together and be one,” said Levasseur. “No matter what kind of clothes you wear, how you dress, what your economic status is, you just become one.”
From inspirational speechs to performances to songs by Hicks and Kirby, separate and together—many students recorded the message for social media while others just watched.
“I get bullied a lot on social media,” said Hicks. “These words are hurtful and you can either take someone’s life with it or deal with it how I deal with it and how I deal with it is singing.”
All of the speakers shared their issues with bullying, both online and in person. With more young people being on social media, more people can say hurtful or mean things without a face to face confrontation.
“I get a lot of hurtful, hurtful comments,” said Ibarra. “And it really does hurt. It’s easy to ignore it, but sometimes you can’t ignore it and it really really gets to you.”
The overall message of the assembly was to be kind and speak up against bullying, and all of the speakers recommended talking to friends, teachers and parents about bullying to themselves or around them.