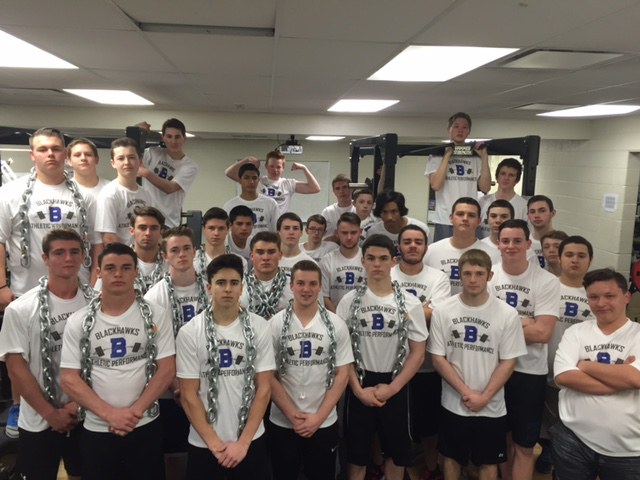 By David Fleet Editor A Brandon High School class are picking up some cash for picking some weights. The Brandon Lift-a-thon is the idea of Joel Malkasian, a BHS physical eduation and health instructor who decided to inspire his class of about 35 lifters in his Athletic Performance Class by challenging them to collect donations […]

By David Fleet Editor Truck Town Thunder #68 robotics team traveled to Mason High School to compete in the FIRST Lansing District Competition on March 25-26. Truck Town Thunder comprised of students from Brandon and Holly high school finished 15th of 40 teams in the weekend event. The team completed the qualification rounds with a […]

Oxford Scarecrow Festival 2003 has come and gone, but all accounts indicate a good time was had by all. “For an event that was put together so quickly, it was great success,” said John Thomas, festival committee member and owner of Parkside Catering and Dairy. “I give the OCDA (the event’s chief sponsor) a lot […]

Atlas Twp.’When township voters head to the polls on Aug. 5, 2003 to renew 1 mill for five years for police protection, things may look slightly different. Using a pen or pencil voters will be asked to blacken circles next to their choice of ‘yes or no? on a paper ballot similar to questionnaire forms […]

If streets could talk

Ortonville – If Mill Street could tell the history of Ortonville it might say the first roads in Brandon Township were Indian trails, of which settlers found their way into the area in the 1830s. The road leading to and from the grist mill, established by Amos Orton in 1856, Mill Street became the artery […]

Members of Lake Orion’s American Legion Post 233 have finalized plans to host traditional Memorial Day events on May 26. Watch a gun salute and hear a tribute to fallen soldiers at East Lawn Cemetery, located on Orion Road, at 9 a.m. The wreath throwing ceremony into Paint Creek is scheduled for 10 a.m. at […]

The weather for the second annual Flower Fair, hosted by Downtown Lake Orion on Saturday, was much sunnier and warmer than last year. That meant moms, dads and kids crowded the village streets shopping for plants, crafts, garden ornaments, outdoor furniture and vendors with clever ideas for summer projects. Kids enjoyed ponyrides, a moonwalk and […]

From The Clarkston News

Independence Township Sunday, May 18, a 42-year-old man was arrested on M-15 for operating under the influence of liquor, a first offense, and having open intoxicants in the vehicle. Saturday, May 17, larceny from a vehicle, with force, on Michigamme. Stereo equipment was stolen. A license plate was stolen off a vehicle parked at a […]

Flames engulfed a home at 11979 Scott Road in Springfield Township, Saturday, May 17. The home was vacant as the owner was killed in a traffic accident a year ago, police reports stated. One witness saw a construction crew operating equipment hours before the fire, which broke out at 9:40 p.m. Independence Township Fire and […]

The Clarkston Area Chamber of Commerce is planning a breakfast ‘Business Chat? roundtable May 29 at Liberty Golf. The event will take place from 7:30-9 a.m. For more information or to make reservations call the chamber at (248) 625-8041.