By Susan Bromley Staff Writer A man accused of sexually abusing two children in Brandon Township will answer to the charges more than seven years after the allegations were first made. Floyd Arthur Boyce, 53, was arraigned March 8 on three counts of criminal sexual conduct first degree on a person under the age of […]

By David Fleet Editor A Goodrich businessman and resident who was arrested on July 18, 2016 after he allegedly used the social media app Grindr to attract a 14-year-old boy into his home for sex now faces new charges related to sexually explicit photos discovered in the investigation. Last July village resident Terry Cadarette was […]

By Susan Bromley Staff Writer Ortonville – The Chamber of Commerce may have flamed out, but a non-profit community organization has stepped up to make sure the fireworks show does not. The Friends of AMOS (Always Making Ortonville Strong) will take over fundraising and planning for the 2017 Ortonville Fireworks following the dissolution of the […]

By David Fleet Editor Goodrich -Benjamin Hodsdon is a marker on a mission. The 16-year-old Brandon Township resident recently launched a GoFundMe campaign (gofundme.com/a-building-for-make-initiative) to raise funds to purchase an historic 130-year-old building located at 10241 Hegel Road. If successful, Hodsdon and other area makers will convert the 4,000 square foot structure to the area’s […]

By Susan Bromley Staff Writer Ortonville – Nearly one-third of septic systems in the village are at-risk of failure. This is far above the average in the county and enough to prompt a recommendation for a septic ordinance and maintenance plan from Randy Gregory, who issued a septic risk assessment at the village council’s March […]

By Susan Bromley Staff Writer Ortonville – The Village Skate Park will open next month with some new twists. After the park was closed all of last year and for part of 2015 due to low registrations, the facility is set to open next month, operated under Brandon Township Parks and Recreation. “I’m glad we […] 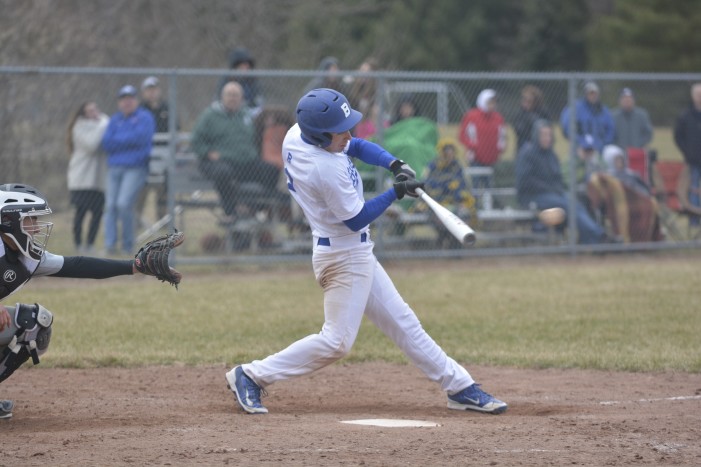 Brandon Senior Dusty Dickens connects for a hit in the Blackhawk home season opener against West Bloomfield. The Blackhawks lost the first game 4-3 and the nightcap 10-0. Photo by Mo Voyer.

Not so happy trails: Village council opts out of grant

By Susan Bromley Staff Writer The village council put the brakes on trail progress Monday night. In a 6-1 vote at their March 27 meeting, the council decided to not apply for DNR land acquisition grants that were originally proposed as possibly being used for the Iron Belle Trail. “You’re going at such a speedy […]